South Africa is almost a year into the COVID-19 pandemic and the subsequent lockdown instituted by government to curb the spread of the virus. However, the scourge of the virus does not seem to be abating, despite all efforts to keep it under control. It is critical therefore that we cut down to the basics to find solutions to the problems facing the country as we continue to navigate the pandemic. What are the driving factors contributing towards the spread of the virus? Are the messages of government lost in translation or the messages are simply not comprehensible?  We have witnessed government constantly struggle to compete with conspiracy theories, myths and other counter views about the situation we find our country in, disturbing every attempt to fight the virus. Are these communication attempts by government to set the record straight reaching the intended audience? At the heart of this, is language, do all our citizens have a firm grasp of what the virus is and how it can be prevented? As we join the rest of the world to commemorate the International Mother Language Day (IMLD) (21 February), it is important that we re-evaluate our commitment towards developing and promoting our languages to promote social cohesion as asserted in the UNESCO IMLD 2021 theme “Fostering multilingualism for inclusion in education and society”, which recognises that languages and multilingualism can advance inclusion to ensure that ‘no one is left behind’.

At the onset of the pandemic, the Pan South African Language Board (PanSALB) sounded the alarm to government through various means that the use of language would be critical during this period and should be regarded with great care and placed at the center of government strategy in the fight against the coronavirus to ensure the country is in the best position to fight and succeed in wiping out the virus. This remains an ongoing plea to government.

Various factors ought to be considered by government in its communication efforts, chief amongst which is the demographic and geographic make up of our country, which is characterized by deep rural areas with people who adhesively follow their traditional ways of life. These are people who still live in the villages, who have their houses built in the bushes, under the cliffs and on top of riverbanks for various traditional reasons such as grazing of livestock. These areas cannot be accessible by modern means, one must ride a horse or walk, apart from that, one would find it difficult to reach people living in such areas. Most of them have not been to school, some have very little schooling. Yet, government must take services to these people, like any other community, as guaranteed by the Constitution of the Republic. How then do we ensure that our messages reach to the far ends of the Country? Because communication can never serve its purpose if it is not through proper means and channels, such as ensuring that it reaches the intended audience in a manner that is well received.

It is the view of PanSALB that the key to service delivery is information, and key to information is language. The people described above speak different traditional dialects/forms of their languages. If government does not pay proper attention to language when taking services to these people, she is planting a summer seed in winter and shall reap no fruits. Government has a responsibility to protect people from all sorts of social ills, hence her attempts to free the Country from the COVID-19 virus. However, if the language issue is not addressed, these attempts shall yield no positive results.

People in rural areas have very little information on the COVID-19 virus, as a result they are dying in numbers in the second wave of the virus. Whilst reports might show that numbers of infections are going down, the fact remains, one death is one too many and these people are facing death daily, something they are not used to. Whereas some of us have the privilege to switch on a news channel or buy a newspaper to get the latest updates on the pandemic, these people are sitting like sheep in the kraal waiting to be slaughtered; they cannot help themselves due to lack of information, irrespective of various attempts to educate communities. No one is getting through to them in this regard, and one of the reasons this is so, is the language used to reach them. Most state information on COVID-19 is in English, a language that can be properly processed by only a few in the country. A few translations of key state messages might be available but reaching the intended audience such as the one described above is a big question. A government official might be sent to speak to them in their language, but if the official is not aware of the language or dialect spoken in the area and the subtle nuances that so often characterizes indigenous languages such as the ways of address, the official may very well have not bothered at all. If the meaning of the information being relayed is lost on the recipients and not fully comprehended, what is the point? The language issue requires serious consideration and proper attention. The comprehension of the information relayed is just as important as access to information, if not more, and government has a duty to ensure that its messages are comprehensible to its people and in a multilingual society such as ours, language is a critical part of that.

The late former state president, Dr Nelson Rholihlahla Mandela, once said “you speak to a man in a language he understands, that goes to his mind, you speak to a man in his language, that goes to his heart”. This statement still rings true today but unfortunately has a long way to be fully realised in the Country as government continues to pay very little attention to the Constitutional ideals that underpin this assertion.

Government needs to go to her people in their languages, not in the language they understand. Processing information is a cognitive exercise, having to process it in a language that you are not most acquainted in becomes even more challenging. The pandemic has challenged us in more ways than one, not least of which is how we relate to each other and how government relates to her citizens. It is now the time, this COVID-19 time, for government and her entities and agents to take the language agenda to the next level. The state is urged to note that the language matter has become more crucial for effective attempts to save our people from this whale killer virus. 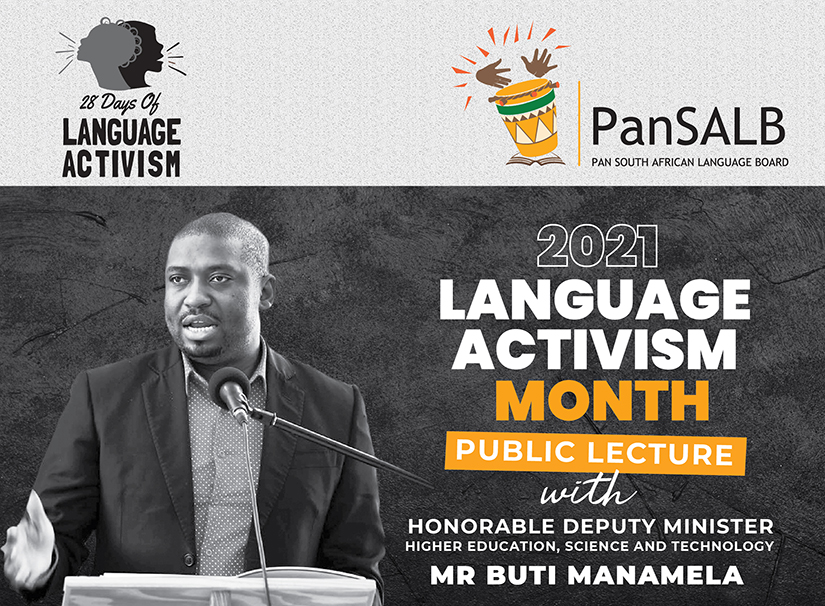 Mr Xolisa Tshongolo is the Acting CEO for PanSALB and the Senior Provincial Manager for the Eastern Cape Office of PanSALB. He is a linguist and an isiXhosa language expert. He is a published author of isiXhosa poetry, novels, folklore and a columnist for Isolezwe lesiXhosa and has written many opinion pieces on the language debate for different newspapers.