The Pan South African Language Board (PanSALB) has, today announced the nominees for the PanSALB Multilingualism Awards. The multilingualism awards are bestowed by the Board on individuals/organisations who have excelled in the promotion, protection and preservation of all official languages including Khoi, Nama and San Languages as well as South African Sign Language.

Winners will be announced at a ceremony scheduled to take place on 15 June 2022 at The Galleria in Sandton, Johannesburg.

“We are very pleased as the Pan South African Language Board, to present the list of these nominees who have, through different forms of artistic expressions, contributed towards the development of their mother tongue and the promotion of the Constitutional ideal of multilingualism” said PanSALB Chief Executive Officer, Mr Lance Schultz.

“Today as we celebrate our heritage as Africans, we also tip our hat off to the preservers of our languages, those who, through song, storytelling, literature and other forms ensure that our languages are kept alive and are maintained for future generations” he added. 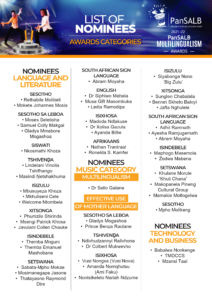 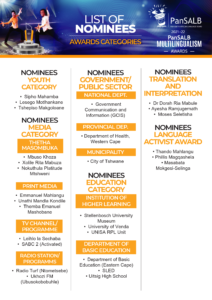